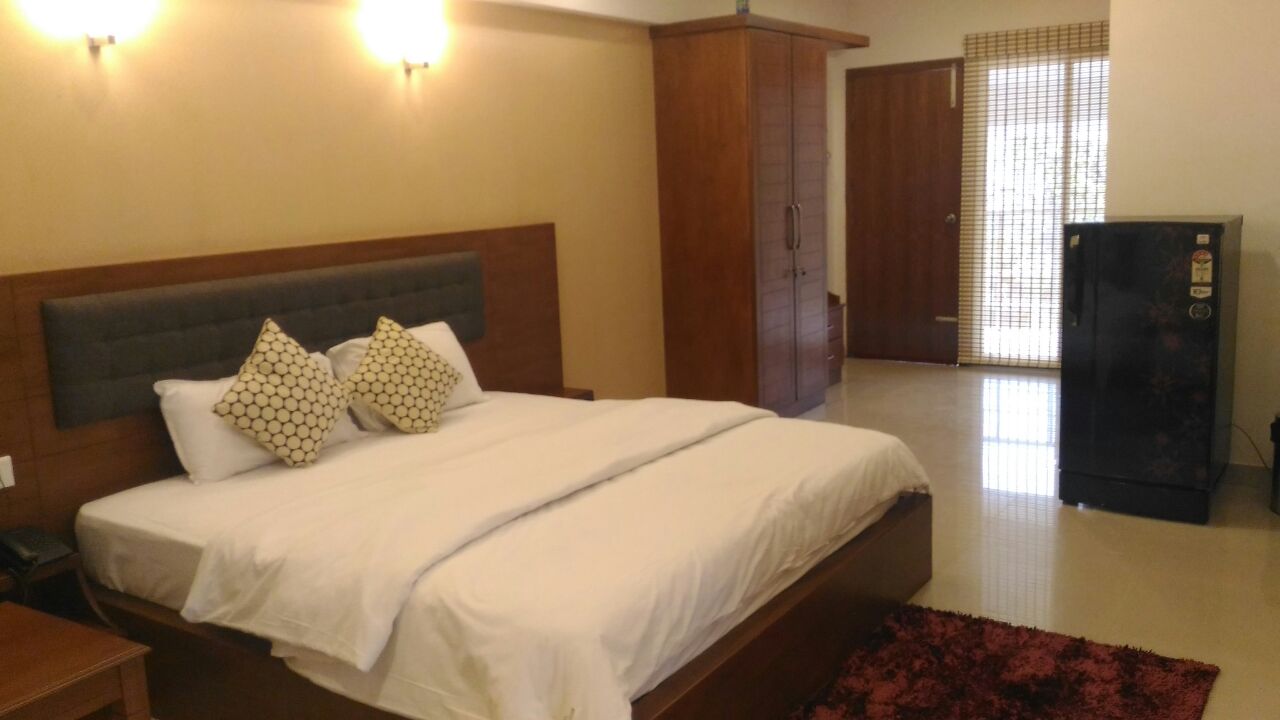 MERCHANT NAVY CLUB’S HOSTEL FACILITY IS OPENED TO ALL SEAFARERS.  SEAFARERS CAN BOOK THE ROOMS ONLINE THROUGH OUR WEBSITE WWW.MNCKOCHI.COM 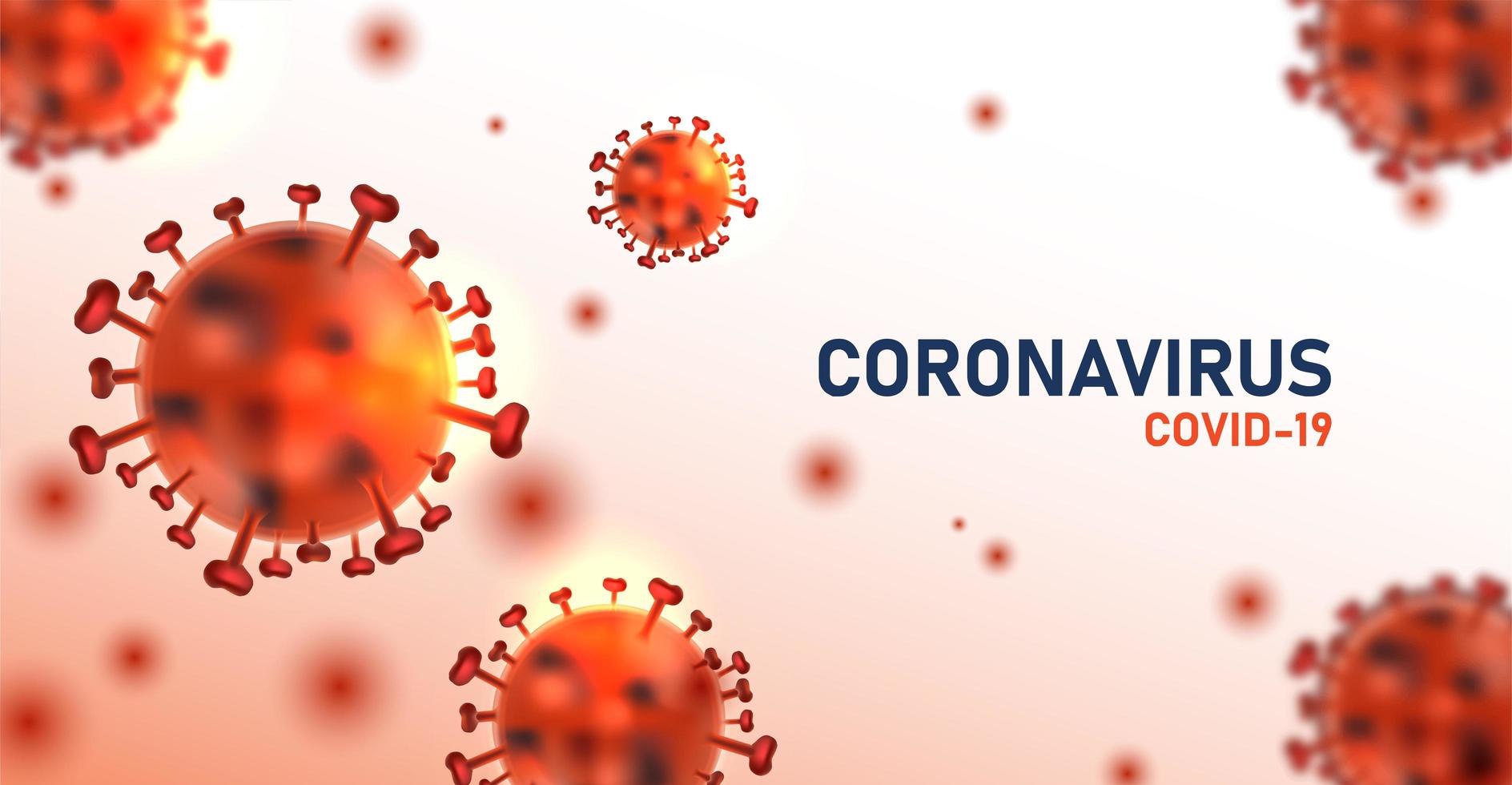 Merchant Navy Club has been converted as a Quarantine centre for the ships CREW Members SIGNING OFF at cochin Port, in compliance of the SOP in this regard, promulgated by the Director General of Shipping, GOI. Accordingly, the club has been providing following rooms w.e.f 15th May 2020, details as follows:-

(All rooms with toilet attached)

The Quarantined crew members should follow the procedures and guidelines laid down by the respective Administration.

Please refer the DG shipping Order No.12 of 2020 on standard operating procedures/Protocols (SOP) for controlled crew change dated 22-04-2020 and the Guidelines for Quarantine facilities Covid-19 by the National Centre for Disease Control, Govt. of India, Ministry of Health and family welfare. 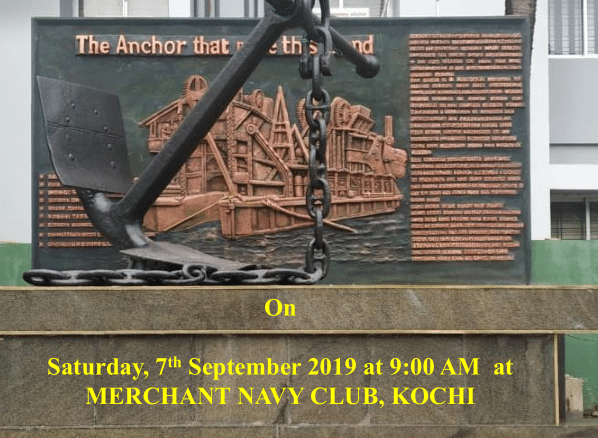 Dedication ceremony of
THE MEMORIAL ANCHOR OF
THE DREDGER “LORD WILLINGDON”
THAT MADE THE WILLINGDON ISLAND
BY
SHRI MOHANLAL,
(Cine Artist & Padma Bhushan Recipient)

The modern port of Cochin is situated in “Wllingdon Island”- a historical
monument of human efforts which was constructed reclaiming 3.2 Sq.km of land under the visionary leadership of a British Harbour Engineer Sir Robert Bristow and named after Lord Willingdon – the 32 nd Viceroy of India who was instrumental in the implementation of this green-field port at the southern end of Indian peninsula.

On May 26, 1928, Capt. Bullen of the steam ship `Padma’, coming down from Bombay sailed calmly into this newly made harbour and the modern port of Cochin was thus opened to the world.
This colossal reclamation work was achieved with the help of a dredger by
name ‘Lord Willingdon’, which worked relentlessly since its arrival at
Kochi in 1926 till the successful completion of this mammoth project.

Having outlived her life Dredger Willingdon sank off the Cochin harbour in 1979, but the remains of her proud memories- “the Anchor” – is being installed in front of the Merchant Navy Club, Kochi as a befitting memorial.
The monument- “The Anchor that made this island”, conceived and executed by famous Artist Maraprabhu Ramachandran is a tribute to the long saga of ambition, skill, determination and perseverance of Robert Bristow and his team in making one of the safest harbours in the peninsula. 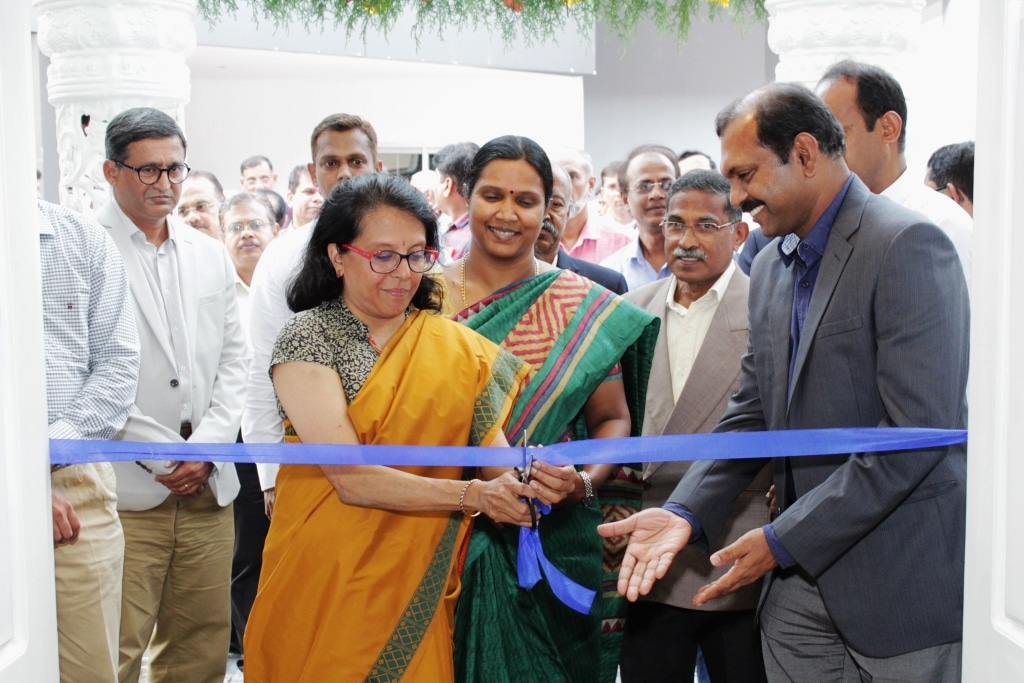 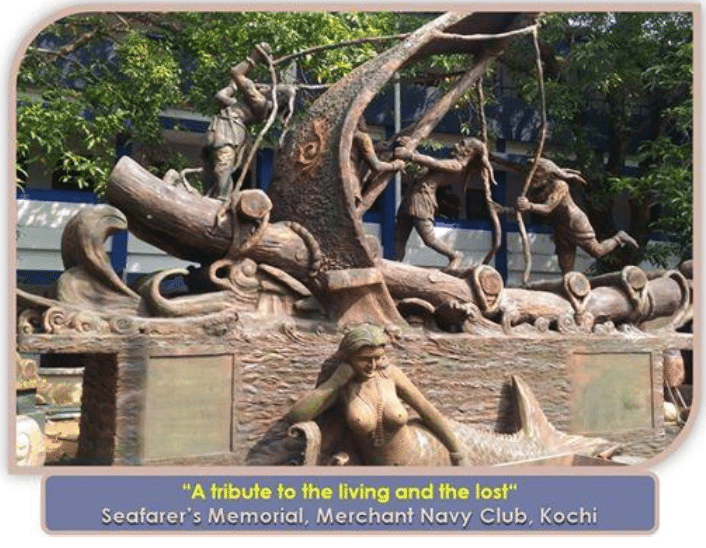 A tribute to the living and the lost – Seafarer’s Memorial

26.Dec.2018 @1600Hrs at the Merchant Navy Club, Kochi , Dr. Malini V Shankar, IAS, Director General of Shipping will dedicate a Seafarer’s Memorial (“A tribute to the living and the lost”).

From Phoenicians to Portuguese to British to Spanish, the history of mankind is the story of explorations, expeditions and conquests by sea….
Christopher Columbus… Captain Cook… Ferdinand Magellan…. Bartolome
Diaz- the history has always been partisan to the successful heroes of the sea.
But the history of seafaring also belongs to several others who perished before the mysteries of the sea. And no seafarer establishment is complete without a memorial paying tribute to such unsung heroes of the seas…..
“A tribute to the living and the lost” stands as a sobering reminder of the
dangers of the sea and also a lasting testament to the strength of a community pooling their efforts to fulfil their dreams……
And many sailor folklore depict mermaids as the good omen which can bring good fortune, bestow boons and save them from storms and ship wrecks.
Mermaids are one of the most famous mythical creatures whose allure and
mystery has taken hold of sailors’ imaginations for ages.
Seafarer’s memorial at the Merchant Navy Club, Kochi recites the saga of
seafaring and depicts their survival instinct against the odds. The memorial
symbolises the power of the community that loves the men and women who go to sea and is a tribute to all those lost at sea and is dedicated to them- past, present, and future.
Our memories of the ocean will linger on, long after our footprints in the sand are gone… Respect the sea and those who make their livings on it…….

Dear Friends, On 26th of December 2018 at 1600Hrs, the Director General of Shipping Dr. Malini V Shankar IAS will dedicate a Seafarer’s Memorial (“A tribute to the living and the lost”) at the Merchant Navy Club, Kochi to the maritime community. May I appeal to all my friends to share this information and attend the function to make it a grand success…. 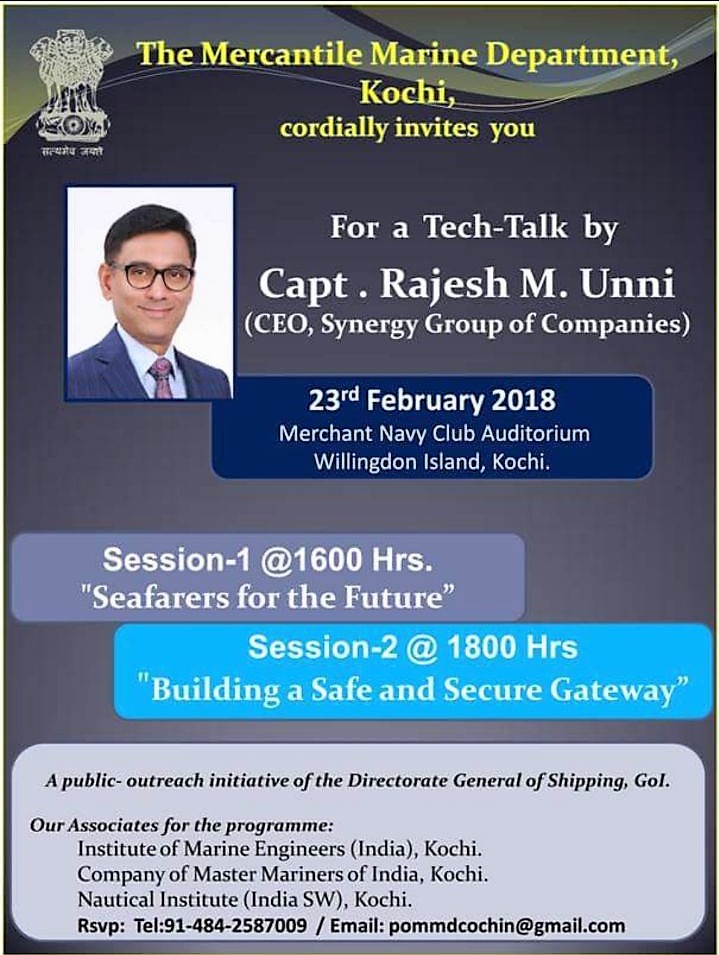 As part of the “public -outreach” initiatives of the Directorate General of Shipping, Govt. of India, the Mercantile Marine Department, Kochi is organizing a “Tech-Talk” by one of the lead personalities of international shipping, Capt. Rajesh M. Unni, CEO of Synergy Group of Companies, Singapore on 23rd February 2018.

Capt. Unni will be talking on two topically relevant subject- (i) “Seafarers for the Future (session-I) and (ii) “Building a Safe and Secure Gateway” (session-2).

Please find attached herewith the invitation to the programme. However, due to space constraints, we will be limiting the number of participants and hence Pre-registration for the programme is compulsory. If interested, please confirm your attendance at the earliest through the contact details provided in the invitation.

If you are from an organization engaged in maritime activities, you can also opt for reserving a Table (Max.6 participants). 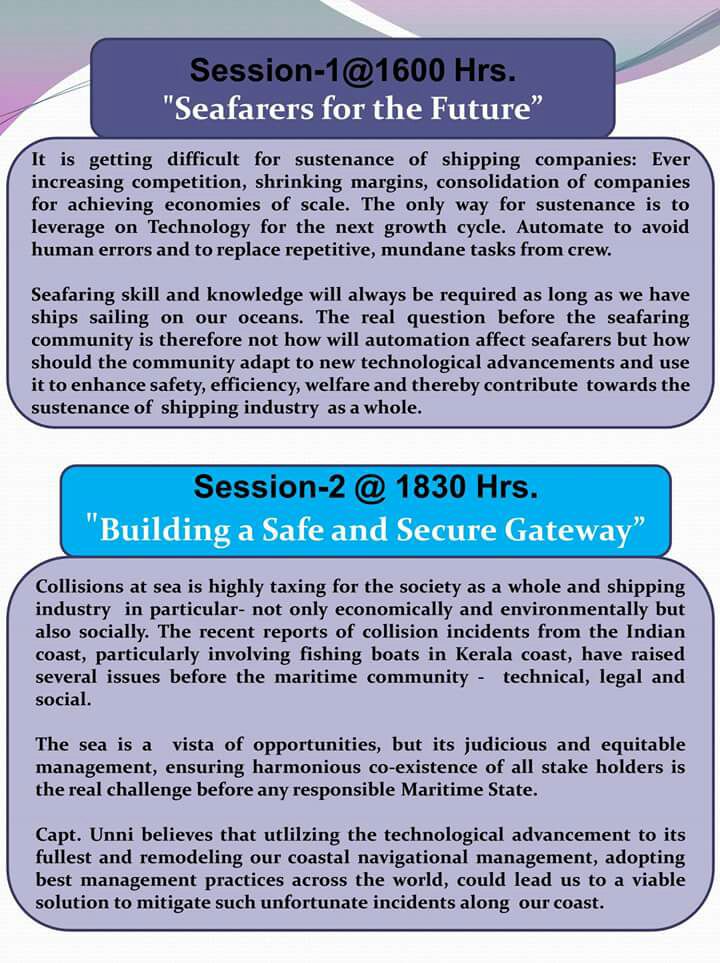 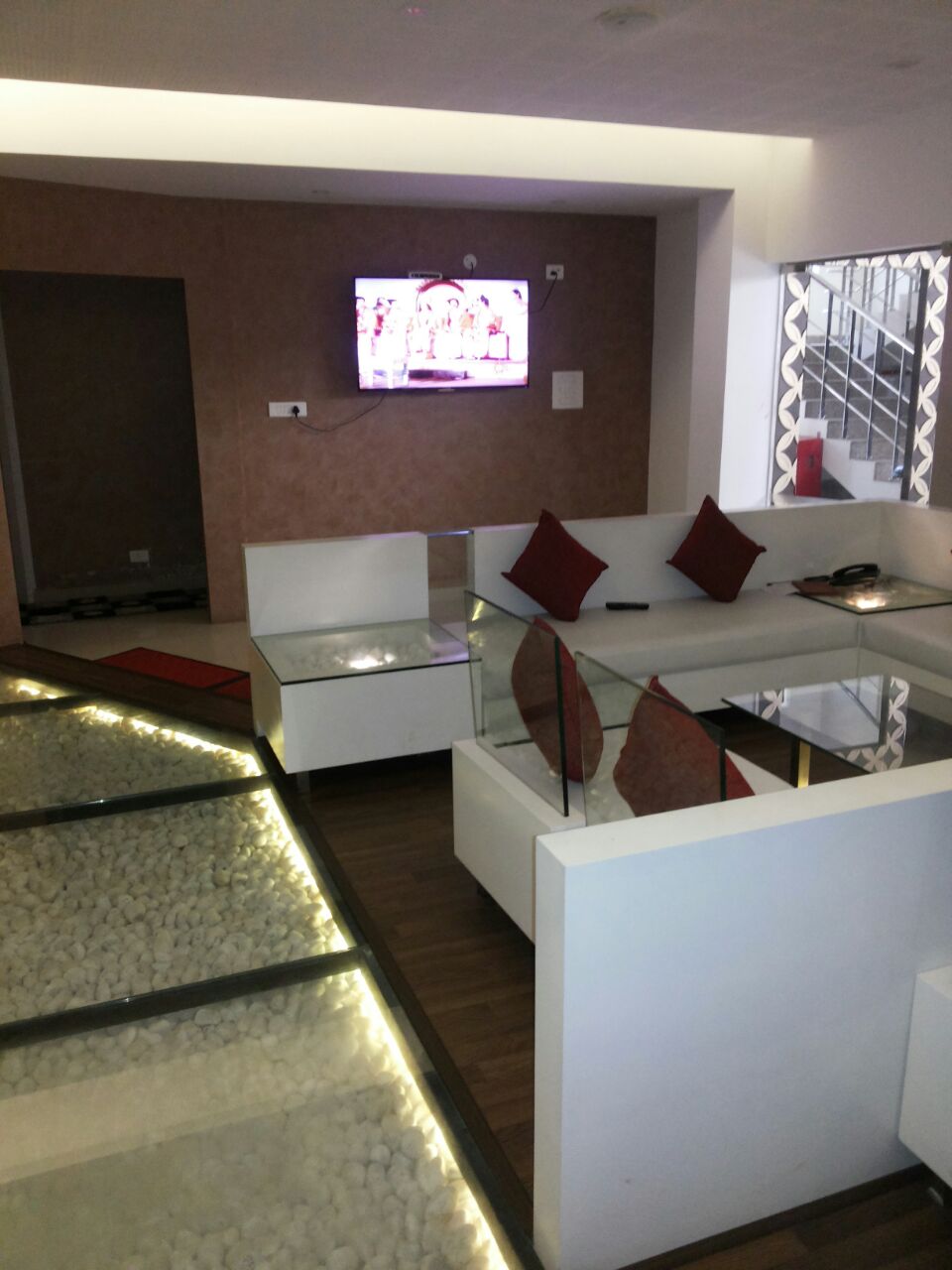 Membership Details of the Club

It is internationally recognized that the seafarers, after weeks and months of isolated life onboard ships need shore
based recreational and welfare facilities within their reach to refresh and recuperate themselves and ‘seafarers’ Club’ is therefore an inseparable part of any international Port facility, as has been expressly provided under various statues, inter-alia, the Merchant Shipping Act and the Indian Port Act.

It is socially obligatory to the member states to implement the provisions of the said Convention, including those for the welfare measures such as Seafarers’ Hostels and shore based recreational facilities and it was against this background that the Government of India developed the infrastructure for the welfare of seafarers in the Port of Kochi, popularly known as the “Merchant Navy Club”